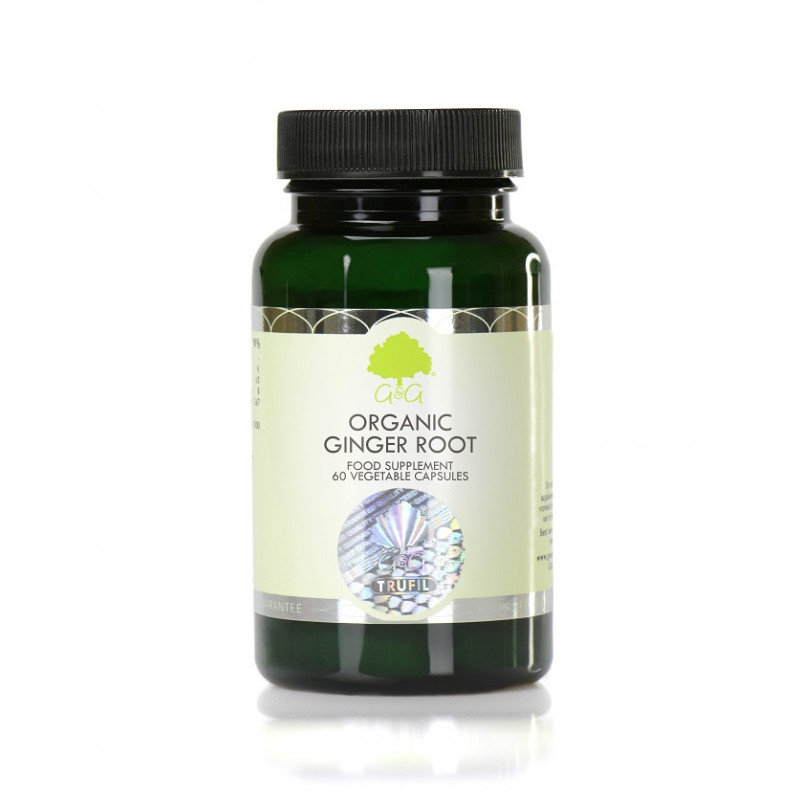 Directions: Take 1 capsule 2-3 times daily with a main meal or as directed by a professional.

NOTHING BUT ORGANIC GINGER ROOT

When it comes to taking a ginger root supplement you don't want anything but organic ginger root in your supplement. Our ginger root comes in the form of a vegetable cellulose capsule. This enables us to offer a supplement that does not require any unnecessary chemicals, excipients, binders or unnatural fillers. A vegetable cellulose capsule is designed specifically to break down naturally within the acid of your stomach, ensuring the nutrients are absorbed during digestion

So what are the key benefits of ginger?

Probably the most common medicinal use for ginger is its ability to relieve nausea and vomiting. In one review, the results of 12 studies and 1,278 pregnant women show that ginger was effective at decreasing symptoms of nausea with minimal risk of side effects. In addition, a study from the University of Rochester Medical Center showed that ginger helped reduce nausea severity in patients receiving chemotherapy.

Although inflammation can be a normal, healthy immune response to injury and infection, research shows that chronic inflammation is a major contributor to conditions such as heart disease, diabetes and cancer.

Ginger contains very potent anti-inflammatory compounds called gingerols, as well as the less commonly known shogaols, paradols and zingerone. These substances are believed to explain why so many people with osteoarthritis or rheumatoid arthritis experience reductions in their pain levels and improvements in their mobility when they consume ginger regularly.

In two clinical studies involving patients who responded to conventional drugs and those who didn’t, physicians found that 75% of arthritis patients and 100% of patients with muscular discomfort experienced relief of pain and/or swelling.

One of the most powerful properties of ginger is its capacity to support the digestive system and ease bloating, pain, heartburn and discomfort. In one study by World Journal of Gastroenterology, ginger was able to speed up the emptying of the stomach by 25 percent, compared to a placebo in people with indigestion. Another study even found that taking ginger capsules with a meal actually doubled the speed of stomach emptying.

Fungal infections are the cause of many health concerns, including athlete’s foot, candidiasis and digestive problems due to overgrowth of the yeast known as candida albicans. Fortunately, ginger boasts impressive antifungal properties, which can help to destroy disease-causing fungi. One test-tube study in 2016 showed that ginger extract was effective against two types of yeast that commonly cause fungal infections in the mouth. Another test-tube study which was carried out in 2003, measured the antifungal effects of 29 plant species, and found that ginger was the most effective at killing off fungus.

A study published in the Journal of Alternative and Complementary Medicine showed that ginger reduces menstrual pain as effectively as medications like ibuprofen and mefanamic acid. These findings are backed up in another study, which reported that ginger reduces both the intensity and duration of pain.

Thanks to its warming properties, ginger is an effective way to promote healthy sweating, which is the body’s natural way of treating a cold or flu virus. Not only does sweating increase detoxification processes, it also produces a potent pathogen-fighting agent known as dermicidin. This powerful compound is manufactured in the body’s sweat glands, secreted into the sweat, and transported to the skin’s surface where it provides protection against invading microorganisms, including bacteria such as E. coli and Staphylococcus aureus, and fungi, including Candida albicans.

Since ginger has been shown to significantly reduce inflammation markers, it could also help treat both joint and muscle pain. One study showed that daily consumption of ginger resulted in moderate-to-large reductions in muscle pain caused by exercise-induced muscle injury. Another study found that ginger extract helped decrease knee pain and the need for pain medication in individuals with osteoarthritis.

Cholesterol is essential for overall health, since it is a key component in producing bile for digestion, and manufacturing hormones. However, high levels of LDL cholesterol can build up in the blood, increasing the risk of heart disease. One of the biggest benefits of ginger is its ability to naturally lower cholesterol levels and triglycerides to reduce your risk of heart problems. A study conducted at Babol University of Medical Sciences actually found that ginger was able to significantly reduce LDL cholesterol and raise HDL cholesterol (referred to  as the “beneficial” type) compared to a placebo.