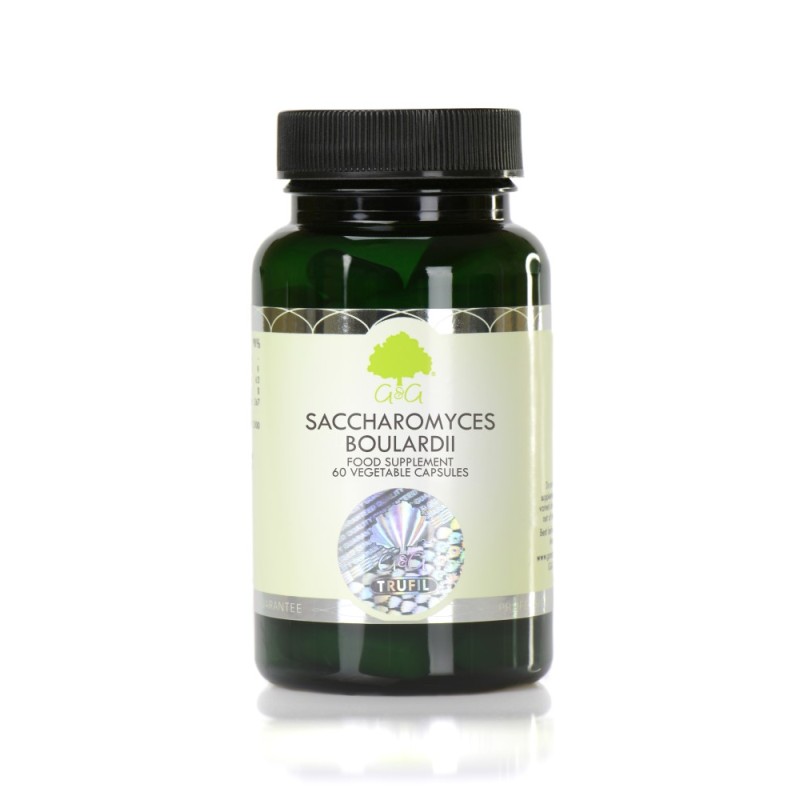 Saccharomyces Boulardii is a natural microorganism that is proven to survive without refrigeration.

Recommended dosage: 1 cap daily or as recommended by a professional.

Saccharomyces boulardii is a unique, non-pathogenic, transient yeast which has been classed as a probiotic for various conditions. It has a sticky outer surface which can attach to bacteria such as E.coli and salmonella and removes it from the body.

Saccharomyces Boulardii does not multiply (colonise) in the gut and takes three days to reach a maximum steady state. Rather than by colonisation itself, S. Boulardii helps the bodies ability to colonise other beneficial bacteria and exerts its effects during its transit through the gastrointestinal tract. It inactivates bacterial toxins that bind to cells and cause inflammation. As it passes through the GI tract, it encourages brush-border enzymes and therefore increase absorption of foods. S.Boulardii may also help in the digestion of sucrose by secreting sucrase.

Saccharomyces Boulardii helps to stimulate the individuals immune responses and enzymes to enhance digestion and absorption. It is useful in cases of diarrhoea in both children and adults including, infection, bacterial overgrowth, traveller’s diarrhoea, and antibiotic, HIV, and rota-virus associated diarrhoea. It can also be used as a preventative measure against harmful effects that can be caused during antibiotic use and has even been found to improve results of antibiotics in cases like Clostridium difficile. Use of this probiotic during antibiotic therapy can help to support gut microflora.

It can work in the bladder to support against urinary tract infections, vaginal infections and candida related infections too. In the case of Crohn’s disease, S. Boulardii can increase sIgA in the intestine and may increase absorption of intestinal chloride, thought to play a role in the treatment of Crohn’s disease. The sIgA is important for immune defences against pathogens, bacteria, toxins and antigens. S. Boulardii antagonises C. Difficile attachment sites helping to prevent infection, and produces proteases that decrease toxicity of C. Difficile toxins.

How do I take Saccharomyces Boulardii?

Boulardii can be taken with cool food or drink and can even be taken out of the capsule if there is difficulty swallowing and mixed with cold food. Doses ranging from 250mg to 3000mg have bee used in divided doses for up to 6 months in cases where individuals have been combating C. difficile disease. It is always advisable to consult a healthcare professional for advise tailored to your requirements.

Can Saccharomyces Boulardii be taken with other a drugs?

Can children and infants use Saccharomyces Boulardii?

S. Boulardii has been used safely in children and infants in clinical trials intended to evaluate the prevention of antibiotic-associated diarrhea in infants and children. In this trial 250mg was given twice a day children aged 6 months to 14 years and no adverse effect were observed.